Rhubarb, Rheum x coltorum, is available in many cultivars (named hybrid varieties). One important characteristic of the different cultivars is the stalk color which can range from red to green. In between colors are often called pink or speckled. A deep red petiole (stalk) is the more popular among consumers, but these plants are often accompanied by poor growth and yield. Green varieties are often much more productive. Many folks often assume the red stemmed rhubarb is sweeter than other colors but color and sweetness are not necessarily related. The Victoria variety, which is one of the greenest varieties, can produce some very sweet stems. 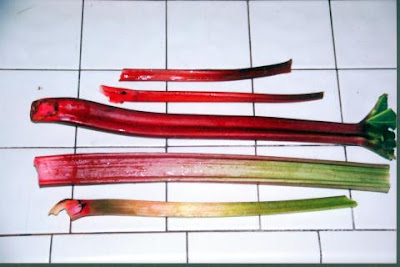 A web search turned up 100's of web pages mentioning various assorted varieties of rhubarb and some description on its growth, color, popularity and flavor. Below is a summary. Some of the information is contradictory, some is just vague. Some of the varieties are mentioned but no description is provided. Some of the differences can be accounted for by considering differences in personal opinion (like if its not red stems is it Pink or Green). Also, different names may be assigned to the same variety in different regions or countries as people move planting material from one location to another. The most common difference I found is the color of Victoria which be be accounted for when considering that this is probably the most common rhubarb variety grown from seed. When a hybrid plants seeds are planted, its offspring will not necessarily be true to the parent, you will get a mix of plants ranging from green through pink with a few plants with red or partly red stems.