Rhubarb is a cool season, perennial plant that is very winter hardy and resistant to drought. Its crop is produced from crowns consisting of fleshy rhizomes and buds. Following a season of growth the rhubarb crown becomes dormant and temperatures below 40°F (5°C) are required to stimulate bud break and subsequent growth. The first shoots to appear in the spring are edible petioles and leaves. These emerge sequentially as long as temperatures remain cool (below 90°F / 32°C). As temperatures increase, top growth is suppressed, even appearing dormant in periods of extreme heat. With declining temperatures in later summer, foliage growth resumes. 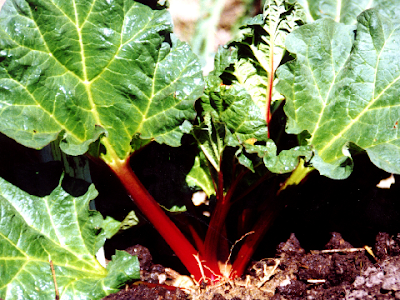 Rhubarb is a cool season, perennial crop. It requires temperatures below 40°F (5°C) to break dormancy and to stimulate spring growth and summer temperatures averaging less than 75°F (24°C) for vigorous vegetative growth. The Northern U.S. and Canada are well suited for rhubarb production. In the United states it grows best in the northern states from Maine south to Illinois and west to Washington state. Once planted, rhubarb plantings remain productive for 8 to 15 years.

In the United States, commercial production is concentrated in Washington (275 Acres), Oregon (200 Acres), and Michigan (200 Acres), with small commercial acreage in many northern states field and greenhouse forced production. A good commercial yield is 15 tons and an exceptional yield is about 18 tons. Red varieties usually yield about 50% of the green types; however, if the crop is harvested twice in one year, total yields will increase about 50%.

Rhubarb can not be very successfully grown in the southern regions of the United States, although there are exceptions. Rhubarb is a popular garden vegetable in northern areas of the United States but unfortunately will not do well in hot, dry summers of the south. If it survives the heat it will not grow well will produce only thin leaf stalks which are spindly and lack color. Rhubarb will wilt very quickly on hot days (over 90 °F). There has been mention of an unknown variety of rhubarb with large green petioles that thrives in the Panhandle north of Amarillo (Texas).

Rhubarb tolerates most soils but grows best on fertile, well-drained soils that are high in organic matter. A clean planting site is essential for the cultivation of rhubarb since no herbicides are registered for use on rhubarb. Small areas of perennial weeds can quickly build up to serious proportions. To prevent this, all perennial weeds should be killed the year before planting. The fields should be cultivated in the spring and after cutting, and hand hoeing may also be necessary. Rhubarb is relatively free of insect and disease problems.

Rhubarb is rather tolerant of soil acidity but does best in slightly to moderately acid soil. The crop can tolerate soil pH as low as 5.0; however, maximum yields are attained at a pH of 6.0 to 6.8. Liberal quantities of fertilizer are needed.

Rhubarb responds well to fertilizers. The quality of the crop harvested depends to a large extent on the care and fertilization received. Commercial growing requires about 1500 pounds of 10-10-10 per acre before planting. Home gardeners should give each plant 1 cup (about 2 handful's) of 10-10-10 fertilizer each spring, applied in a circle around the plant when growth starts. Fertilize each year and cultivate shallowly as often as necessary to remove weeds.

Manure is an extremely valuable source of organic matter as it helps to conserve moisture, preserves the soil structure, and makes nutrients readily available. Fifteen tons of manure should be applied per acre before planting for commercial growing or one to two shovels per plant for home gardeners. An application of composted manure or leaves is beneficial in late fall and early winter, but do not cover the crowns as this may promote rotting. Fresh manure should not be used as this will burn the tender rhubarb plants. 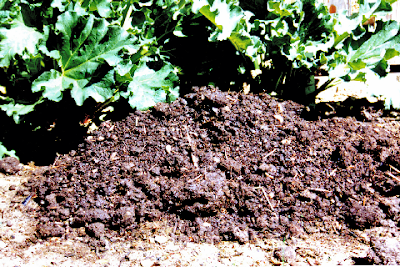 Plant rhubarb roots in early spring. Planting seeds is not recommended as it may take too long for the plants to become established, and the seedlings would not come true to color and size, if that is important to you.

Space rhubarb roots 24 to 48 inches (60-120 cm) apart in rows 3 to 4 feet (1 m) apart for commercial growing. These distances can be decreased to 36 inches for plants in rows and rows for smaller gardens (non commercial). Much smaller than this will seriously crowd the plants and result in a diminished crop and increase the likelihood of spreading disease. A 2-3 year old plant, the Victoria variety can be 4 feet (1.25 meter) in diameter and 3 feet (1 meter) tall. Plant the roots with the crown bud 2 inches (5 cm) below the surface of the soil. The hole for the crown should be dug extra large and composted manure, peat moss or dairy organic should be mixed with the soil to be placed around the roots. Firm the soil around the roots but keep it loose over the buds. Water the crowns after planting. Give the plant 1/4 cup of 5-10-10 worked in to the top 10 inches of soil at planting time. Good garden drainage is essential in growing rhubarb. For home gardeners, planting in raised beds helps ensure against rotting of the crowns. Crowns will have a longevity of many years, but because of diseases and insects, it is Normal to reset a bed after 4-5 years.

Rhubarb responds to good care and watering. Remove the flower stalks as they are seen. During the first year of planting, the stalks should not be picked, since food from the leaves is needed to nourish the roots for the next year's growth. One light picking may be taken during the year following planting if the plants are vigorous, and beginning the second year following planting, the entire plant may be harvested. When harvesting rhubarb, the first step is to cut the stalks at the soil line or simply pull them out individually. All of the stalks of a plant may be harvested at one time, or pulled out selectively over a 4-6 week period. After the stalks are cut, the leaves may be removed. For the home (small) gardener, rhubarb will tolerate a fair amount of neglect and still thrive, they are very tough plants.

The rhubarb season (in the United States) runs from April to September, although it can be grown forced (see Forcing in winter) which accounts for its availability early in the year when other crops are scarce. Early forced rhubarb has a distinctive bright pink color and delicate flavor. Outdoor rhubarb is a little darker in color.

Refrain from harvesting rhubarb the first year after planting. Each plant needs time to build up food reserves in the root to produce thick, robust stems.

Established rhubarb plants can be coaxed into early outdoor production by covering plants with clear plastic in the early spring, before the crown starts to grow. As growth starts, cut 1/4 inch ventilation holes in the plastic. As leaves get larger, cut the plastic to keep the leaves free.

Rhubarb hit by a frost or freeze can still be eaten provided the stalks are still firm and upright. Leaf injury may be noticeable with some brown or black discoloration on the edges. If the stems appear soft and mushy, do not eat them. Severe cold injury may cause the oxalic acid crystals in the leaves to migrate to the stalks increasing the likelihood of poisoning problems. If in doubt about the safety of eating the stalks, don't. Cut those stalks off and compost them. Allow new stalks to develop before eating, or if it is the end of the growing season, try forcing some rhubarb indoors (see Forcing in winter).

How do I prepare my rhubarb plants for winter

Rhubarb needs cold to trigger spring growth. Rhubarb tolerates very cold (-20°F) very well. Collect the last few stalks after the first hard frost and throw them on the compost pile. Then spread a layer (2-3") or compost (or leaves or hay) to prevent winter winds from drying out your roots. You don't need to do much.

Do I need to thin my overgrown rhubarb?

Established clumps will have to be trimmed every 4 to 5 years or when the stalks get small and spindly or when the crown is visibly crowded. This will help the plant to keep growing nice thick stems. This is done by digging around and trimming the crown down to 4 or 5 buds. You can also use this opportunity to divide your plant into more plants. You may encounter is rot in the crowns from excessive water in the crown area. If so, destroy these plants.
Posted by Dan at 4:32 PM

Email ThisBlogThis!Share to TwitterShare to FacebookShare to Pinterest
Labels: Growing