Rhubarb is a plant name for the many different species of Rheum, growing in the wild in the mountains of the Western and North-western provinces of China and in the adjoining Tibetan territory and in cultivation in much of Europe and the United States.

Rhubarb is a vegetable with a unique taste that makes it a favorite in many pies and desserts. It originated in Asia over 2,000 years ago. It was initially cultivated for its medicinal qualities, it was not until the 18th century that rhubarb was grown for culinary purposes in Britain and America. Rhubarb is often commonly mistaken to be a fruit but rhubarb is actually a close relative of garden sorrel, and is therefore a member of the vegetable family. Rhubarb is rich in vitamin C and dietary fiber. 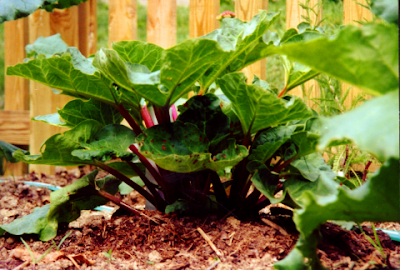 Rhubarb is a perennial plant (the kind that grows from year to year) which forms large fleshy rhizomes and large leaves with long, thick (and tasty) petioles (stalks). Rhubarb stalks are commonly found in supermarkets, fresh rhubarb is prized by gourmet cooks. Some folks say the finest quality rhubarb is grown in Michigan, Ontario, Canada, and other northern states in the United States. Fresh rhubarb is available from early winter through early summer. Winter rhubarb is commercially produced in forcing houses in Michigan and Ontario. 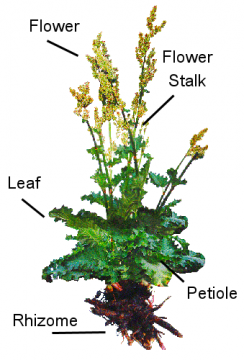 Rhubarb leaves grow from the ground in early spring. The leaves can grow up to a foot or more in width and length and the plant may grow to a height of several feet. The blade or green leaves of the plant are the part that is poisonous. They contain high concentrations of oxalic acid crystals which can cause serious problems when eaten. These crystals can cause the tongue and throat to swell, preventing breathing. The edible petioles (stalks) are up to 18 inches long, 1 to 2 inches in diameter, generally somewhat hemispherical in cross section. These petioles are cut and used in pies, jams, jellies, sauces and juice. Rhubarb rhizomes and the crown persist for many years. The roots are also taken up and bedded in cellars or houses in winter, forcing growth in darkness to produce etiolated leaf-stems, which are much prized.

Email ThisBlogThis!Share to TwitterShare to FacebookShare to Pinterest
Labels: Information