Rhubarb can be grown year round. You can grow tender stalks out of season by "forcing" rhubarb at home during the late winter and early spring. Forcing is most successful with large diameter roots. Dig up the roots of plants that are to be forced (three-year-old plants are best) keeping excess soil on the roots to prevent damage from subzero freezing. Pot them in large pots and leave them outside exposed to several hard freezes. After the roots are thoroughly chilled, take them indoors to a warm (with a temperature of 50 to 65­ F), dark place (a cellar, hot bed, etc.) and cover them with peat, soil, or sawdust. A wooden bushel basket makes an ideal container for forcing. Keep them moist. Harvest the stalks when they are 12 to 18 inches high. The leaves will be small and the petioles will be tender and uniformly bright pink. The harvest period for forced roots is about one month. After the harvest set the plants outside and protect them with mulch. They can be replanted in the spring. For longer harvests bring a few roots in at one time. To get enough to use in most recipes you will need to force 3-4 plants. 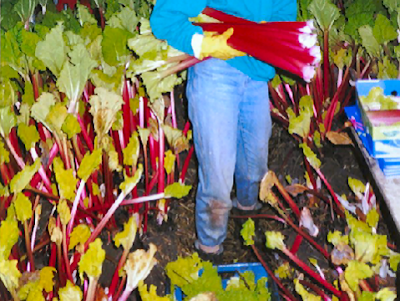 Rhubarb can also be forced outdoors during the winter by placing large light-proof pots (like plastic garbage cans) over the crowns and if possible insulating with straw, or better still, fresh horse manure which is warm and will speed up the forcing process.
Step by step: Forcing Rhubarb Indoors

1. We start with a small rhubarb rhizome. In this case, this is a small division from an established plant, I just sliced off a section of the rhizome and root this last fall (November 1996). Put the rhizome in a large pot (this one is 12 inches (30 cm) in diameter) and cover with soil leaving just the growing bud exposed. Leave this outside in the cold for 3-4 weeks. Rhubarb needs to be exposed to several days at freezing temperatures (32 degrees F or 0 degrees C). Then bring the pot indoors to a dark and cool (50 degrees C or 10 degrees C) place like a basement or a corner in a garage. Shown here is the rhubarb plant 2 weeks after being brought indoors for forcing.

2. The rhubarb will grow rather slowly at first while it is growing new roots. Shown here is the same potted plant as above but 6 weeks later (8 weeks from being brought indoors for forcing). The petiole is about 8 inches (20 cm) long from the top of the rhizome to the base of the leaf.

3. The rhubarb will pick up growing speed after 8 weeks. This is the same plant as above 4 weeks later (12 weeks from being brought indoors). This plant grew 3 more stalks, the longest was 22 inches (55 cm). You should harvest all of the stalks and return the pot to the outdoors for the remainder of the winter. This plant can be re-planted in your garden where it will grow again in the spring. 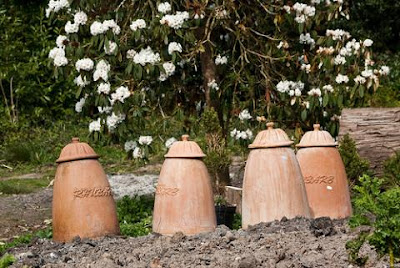