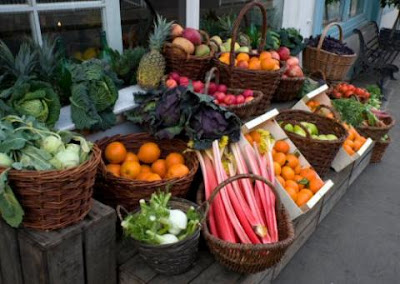 Rhubarb is sold by the "bunch" which is usually 2 to 2-1/2 lbs., 1 lb. cooked yields 3/4 cup. When buying Rhubarb choose fresh crisp stalks, and peel off any stringy covering before use. Stand the stalks in cold water for an hour or so to refresh them before cooking. The stalks can be stored for 2-4 weeks at 32­ F. A 1 pound bunch contains 3-5 stalks. Before use, discard any leaves and trim the ends. Completely peeling rhubarb is unnecessary. Rhubarb requires sweetening to minimize the extreme tartness. It can be served as a sauce over ice cream, combined with fresh strawberries, or made into pies, tarts, puddings, breads, jam, jellies, and refreshing beverages.

The time of harvest is dependent upon the variety as well as on the location and temperature. With varieties that produce many seed stalks, harvesting should begin before the seeds start to turn color. Home gardeners should remove the seed stalks when they first appear. Generally, harvesting begins in late May or early June, with an option of a second harvest made in late August. A commercially available mechanical Rhubarb harvester can recover 60 to 70% of the crop in a once-over harvest. Approximately 25% of Michigan's Rhubarb is harvested twice. The stalks should be firm at harvest. If they are harvested too late they become pithy and tough. In Maryland I can continuously harvest from 3 plants starting in early May and continuing through to the end of the summer if I water regularly. I pick 2-4 stalks at a time from each plant and can do this almost weekly. I leave most of the plant intact to keep it actively growing. Lack of water and the more intense heat in the hotter parts of the summer seems to be what ends my harvest.

Harvesting should be delayed until the second year following planting to permit accumulation of root reserve. During the second year, a light harvest may be taken and normal harvests may begin in the third year. Stalks may be clean cut, taking the entire plant at the soil line or harvesting sequentially by pulling the stalks at the prime size over a period of 4-6 weeks. Do not remove more than 2/3 of the fully developed petiole from any plant at harvest. As stalks are cut, leaves are removed and left in the field or they can be composed.

Select petioles that are bright pink, crisp and free of disease or insect damage. Young, dark pink, smaller diameter petioles are sweeter and more tender than thick, long green ones, but this also depends and the particular variety of Rhubarb. Don't cut the Rhubarb stalks from the plant, but instead snap them off. They will come away quite easily and this is much better for the plant. I grab a stalk right down where it emerges from the ground, and use a sort of rocking, twisting motion. Visualize snapping away a single celery stalk from the bunch. If the stalk is grasped too high it snaps in two. At any given time, harvest less than 1/3 of the stalks from any one plant. Rhubarb may be harvested later but very few stalks should be taken from any one plant.

Rhubarb, if not used immediately, can be stored by refrigeration, caning, freezing or drying. Here are some very basic procedures for each of these methods.

Cut all of the leaf away from the Rhubarb petiole and the petioles will keep well in the refrigerator for two to three weeks in sealed plastic bags.


Recommended process time for Rhubarb, stewed in a boiling-water caner


Head space to allow between packed food and closure

Syrups for Use in Freezing Fruits

Wash and remove any blemished areas. Cut off the pulpy ends. Cut into 1/2-inch strips or 1/2-inch cubes. To decrease some of the acidity in the Rhubarb (and reduce the amount of sugar needed to sweeten), pour boiling water over the pieces and let sit for 3 to 5 minutes. Drain. A characteristic of the dried product will be brittle.
Posted by Dan at 9:55 AM

Email ThisBlogThis!Share to TwitterShare to FacebookShare to Pinterest
Labels: Culinary