Rhubarb plants will occasionally send up seed stalks with flowers in the middle of the plants. These stalks may not grow on young plants but are common on plants that are 3-4 years old and older. Some varieties of rhubarb are more likely to flower than others. Victoria is known to be a prolific flowering variety. Allowing the plant to complete flowering will reduce the vigor of the plant and shorten its stalk producing season. If the plant is grown as an ornamental the tall stalks of flowers (Victoria has white (greenish)) is quite impressive. But if you are growing rhubarb as a vegetable for the stalks, then the flowers and seed stalks should be cut out as soon as they start forming. The plant may still continue to produce more flower stalks throughout the spring, so keep cutting them. Contrary to popular opinion, rhubarb plants do NOT become poisonous after flowering starts. The leaf stalks can still be cut and used and the leaves themselves should be discarded (composted) as they are always poisonous. 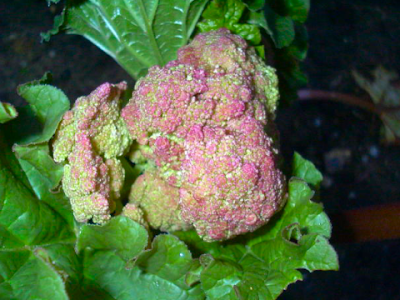 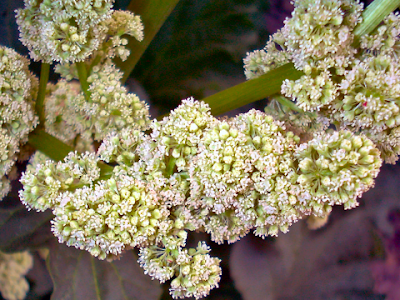 When you remove the flow stalks be sure to remove the complete stalk. These stalks don't pull off as easily as the leave stalks do, so you may need to use a knife. Cut the flower stalk off cleanly as close to the main plant as possible. I have found that leaving a small stub of a stalk will encourage rotting and provides a home to slugs and insects that can damage your rhubarb plants. Shown below is the stub of a flower stalk that has become home to 100's of earwigs. 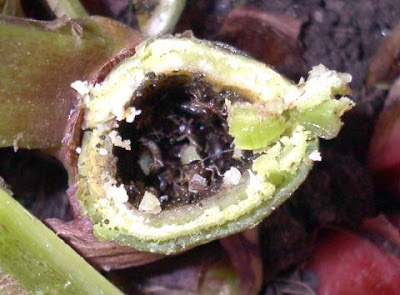