Rhubarb plants may be started from seed. Plants started from seed typically take 2 years to get a harvest, although in the proper climate one can get satisfactory results in one growing season. Also, propagation of rhubarb from seed is not recommended, as rhubarb seedlings do not retain the characteristics of the parent plants (see comments on Varieties). It is best to propagate with planting divisions obtained from splitting the crowns as described in the next section.
Step by Step: Growing Rhubarb from seeds 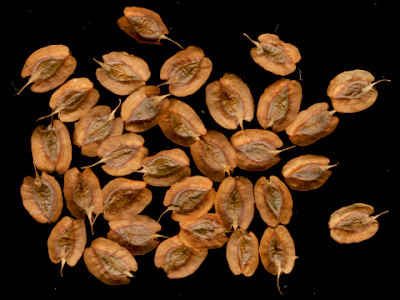 Rhubarb seeds can be purchased mail order from a number of companies (see Sources). The seeds are encased in a rather large paper-like shell. Soak the seeds in water for a few hours before planting. Plant the seeds in a suitable planting mixture. These seeds were sown in a commercially available mixture, 2 seeds per pot. I planted them in peat pots to making transplanting them easier and then put them in a sunny window. A heating cable will help speed the germination if the room temperature is below 70 degrees F.

Rhubarb seeds germinate quickly. Shown here is a tiny rhubarb seedling at 10 days after planting (March 1997). At this point I will pinch off all but one seedling (I planted 2 seeds per pot, expecting the germination rater to be 50%). If I had wanted to grow these as annuals I would have started them sooner, like in the fall of the previous year, so I could plant them outside in early April.

As the weather turned warmer (45 degrees F during the day, near 32 degrees F at night) I transplanted the rhubarb seedlings outdoors. I planted them in a mixture of 50% compost and 50% garden soil.

Protect the seedlings from the bright sun. Rather than harden off the seedlings by gradually increasing their exposure to sunlight, I fitted the rhubarb plants with tiny little paper hats. These only lasted for about a week but that was long enough.

Shown here is the same seeding shown above but in 60 day since planting (30 days after being transplanted outside). The plant is finally beginning to look like a rhubarb plant. At the end of the growing season these plants were about 12 inches () tall and had about 15 leaves each. Not quite enough for a harvest. Next year maybe.

Growing Rhubarb as an annual

Rhubarb can be grown as an annual from seed in areas that have a cool season (like a cool winter in the southern parts of the US). Plant seeds in nursery pots, transplant outside when the plants about 3-4" tall. Harvest stalks as they mature. Be careful to not over water it as rhubarb can get root rot if the ground is too wet. ECHO ("Educational Concerns for Hunger Organization") has claimed good luck with planting rhubarb seed in August and harvesting in March-May. Seed grown rhubarb will have fewer plants with the intense red color stems we are used to, but tasting a pie grown from subtropical rhubarb can help one overlook that quickly! You will probably get a mix of plant colors ranging from green through pink with a few plants with red or partly red stems. The variety Victoria is extremely productive. Seeds can be purchased from Park Seed Co. Greenwood South Carolina, USA.
Posted by Dan at 2:09 PM